We live in an era where convenience and environmental concerns are both important issues, but often seem to contradict each other. In recent times, some industries have made big leaps in bringing the two together, with the number of solar panels and wind farms we see in our travels proving that the two can work together. We can have the convenience of electricity, with a much-reduced environmental impact. Another fine example is that of kerbside waste collection and the recycling process, which reduces the amount of rubbish going to landfill and the demand for raw materials. And it all starts just outside the front gate, saving us a trip to the local tip or transfer station. 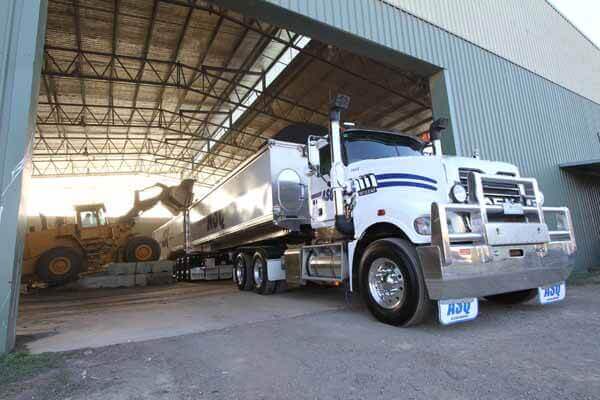 If you are lucky enough to live in an area where the service is offered, green waste collection is much the same. Lawn clippings, branches and all those plants in the vegie garden that are going to seed are simply put in the bin, and whisked away on bin day. Most of it is then recycled, and converted into products that will be returned to gardens in the form of mulch, compost or fertiliser.

The process involves a few steps, with transport being an important factor in the cycle. Given the distances between green waste recycling facilities, in most cases the kerbside collection will be consolidated somewhere locally for transport to a recycling facility aboard a larger truck, saving time and allowing more households to be serviced each day. In Bendigo, Victoria, the responsibility of moving each day’s green waste collection to the recycling plant falls to Andy Huddle, who works for Allstone Quarries (ASQ), also based in Bendigo. 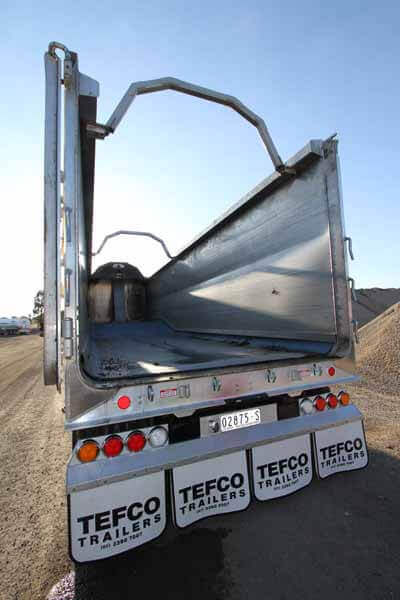 ASQ is a family-based company that operates a fleet of 22 trucks, which service their quarry, precast concrete and garden supplies businesses across Central Victoria. From humble beginnings in Castlemaine, the company moved into mobile crushing before opening its first quarry in Newbridge in 1999. Since then the company has grown to employ over 100 people across the various company divisions.

The latest addition to the fleet is the Tefco B-double combination that is used to cart green waste, and was specially built for the role. As Wes Bird, operations manager at ASQ explained, “We won a contract to cart the green waste, which is a little different for us. We’ve always just done quarry materials”.

“It’s a bit of an odd one, because we wanted something that we could get bulk cubic metres on, but then still be able to come back and run our quarry materials around,” Wes said.

“We wanted to be able to load from the ground with our wheel loaders, so we came up with a side height of 3.4 metres. Then Tefco came up with the drop in the B-trailer, to get our cubic metres on it, and also running the demolition tarp with the higher bows”. These ideas combine to give the B-double a capacity of 88 cubic metres at water level, and 110 cubic metres with a heaped load 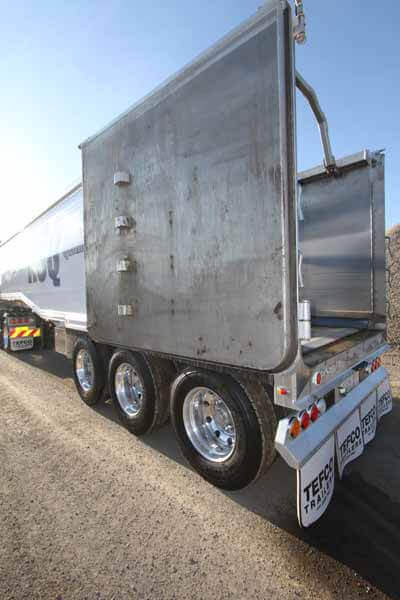 “That way we can pretty much get a whole day’s green waste moved in one hit, and Andy can load concrete sand or quarry products on the return trip,” Wes said.

Both trailers are fitted with heavy-duty cross members at the rear that provide extra support for the sidewalls. This allowed ASQ to have the trailers built with two-way swinging tailgates to allow for easy unloading of the green waste.

“The volume of it is so big, any obstruction will hold it up,” Wes explained. “So we can swing the tailgate on them, and anything under the height of the bows will just slide straight out. We haven’t had any dramas tipping it off,” he said.

Also aiding in the unloading process is the fitment of floor liners in both trailers. As Andy explained, “They are four-stage hoists, but, by the time it gets to the second stage, it’s usually empty”.

The need to unhook the back trailer in order to unload the A-trailer was also taken into account during the design process, with Razor electric landing leg winders fitted to make life a little easier for the operator. The rear chassis section of the A-trailer, with the turntable and axles mounted on it, slides under the body with air-operated pins to keep it in place in either position, and both trailers operate as chassis tippers, keeping all the wheels firmly on the ground while the body is in the air. Electric roll tarps, which can be operated either from the trailer or by remote control, also add to the ease of operation. The B-trailer is also fitted with dual air, electric and hydraulic connectors (on the front and the underside of the trailer), meaning it can be used as a single trailer behind any of ASQ’s prime movers should the need arise. 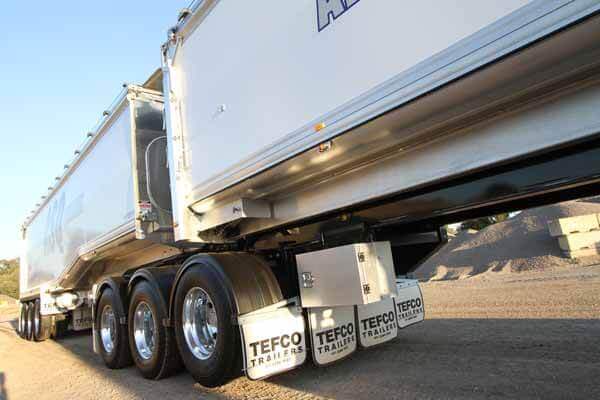 Both trailers are fitted with lift axles, with Hendrickson axles and INTRAAX suspension. While the A-trailer has a full steel chassis, the B-trailer chassis is a work of aluminium art, with only the section that supports the suspension being made of steel. This helps to keep the tare weight down, with the B-trailer weighing only 7.4 tonnes empty. This gives the Tefco B-double combination a 45-tonne payload under mass management.

Being the first B-double set in the ASQ fleet, the Tefco trailers are proving their worth in terms of versatility and productivity, thanks to the time invested in the design phase.

“We explained what we wanted, trying to get the balance of something that is good for the quarry and good for the green waste, which usually doesn’t work,” Wes said. “We came up with a pretty good balance”.

Wes was also complimentary on the experience of dealing with Tefco, saying, “They are just genuine guys. Most of the others seem to be just salesmen. Mick knows what you want, you’re not just getting the sales pitch, he’s actually trying to help you out”.

It would seem that ASQ and Tefco have put together the perfect combination to do two very different jobs. By working together, and with each bringing their own experience to the table, the two companies have shown that thinking outside the square can bring great results in terms of versatility, ease of operation, and productivity. My thanks to Wes and Andy for their time in what was a busy schedule, and compliments to Andy for keeping the unit looking as good as it does in a dirty working environment.

Save your back with lift system

Razor Delta has it covered